Another Rate Hike To Fight Off Stubborn Inflation 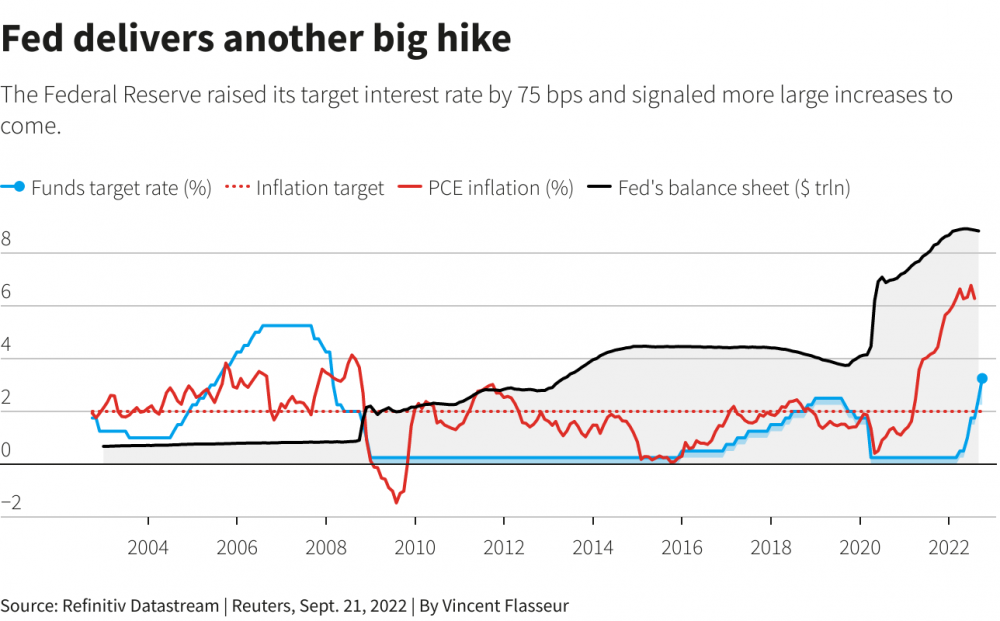 On September 21, the Federal Reserve raised the benchmark interest rates by another three-quarter of a percentage point to a new range of 3.0% to 3.25% — its highest level since 2008 and indicated it will keep hiking well above the current level.

“My main message has not changed since Jackson Hole,” Powell said in his post-meeting news conference, referring to his policy speech at the Fed’s annual symposium in August in Wyoming. “The Federal Open Market Committee (FOMC) is strongly resolved to bring inflation down to 2%, and we will keep at it until the job is done.”

The inflation has been running at more than three times the central bank's target and growth slowing to a stall. Barclays says Fed policymakers had little choice but to lift rates sharply again after a report last week revealed that inflation – as measured by the consumer price index (CPI) – rose 8.3% annually in August, below June’s 40-year high of 9.1% but above the 8% expected.

In addition to that FOMC sees GDP growth slowing to 0.2% for 2022, rising slightly in the following years to a longer-term rate of just 1.8%. The revised forecast is a sharp cut from the 1.7% estimate in June and comes following two consecutive quarters of negative growth, a commonly accepted definition of recession.

As reported by CNBC, FOMC members indicate they expect the rate hikes to have consequences. The funds' rate on its face addresses the rates that banks charge each other for overnight lending, but it also plays into many consumer adjustable-rate debt instruments, such as credit cards, auto financing, and home equity loans.