No relief from bear market 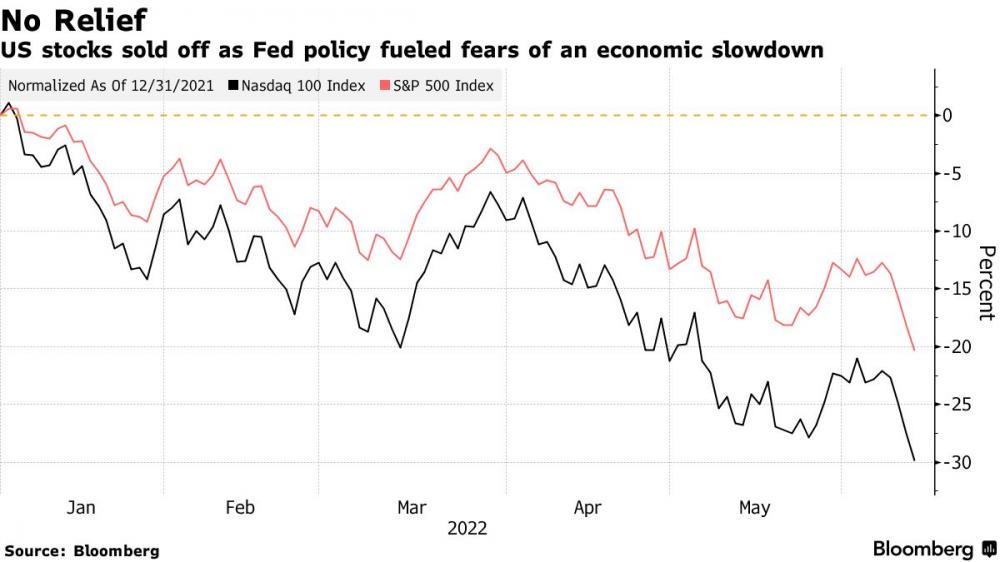 The S&P 500 fell 3.9% to 3,749.63 on June 13, marking its lowest decline since March 2020 and meeting the technical definition of a bear market with the index’s year-to-date losses at 22%. All 11 major industry groups shed more than 2%. At one point during the trading day, every single stock in the S&P 500 was losing and only five stocks in the benchmark closed the day with a gain.

The U.S. 2-year Treasury bond rate jumped to over 3.2%— its highest level since 2007 and at one point trading above the 10-year Treasury bond, edging closer to a yield curve inversion, which many financial market professionals view as a sign of a looming recession.

The cost to protect investment-grade debt from default soared as a closely watched segment of the US bond curve inverted. Bloomberg’s dollar gauge rose as much as 1%, adding to a backdrop that sparked a spiral n risky assets.

Morgan Stanley Chief James Gorman has revised his past evaluations of chances of the recession occurring to 50%-50% now from less than 50% at the end of May.

Morgan Stanley strategists led by Michael Wilson wrote in a note to Bloomberg that they see S&P 500 at 3,400 points, or about 9% lower from Monday’s close by mid-to-late August if a recession is avoided, which accounts for earnings of 3% to 5% lower than consensus, a 10-year Treasury yield at 3% and an equity risk premium at 370 basis points.

Goldman Sachs has predicted that equity valuations will remain roughly flat, while earnings growth will boost the S&P 500 to 4,300 by year-end.

Fed leaders were expected to meet that day to discuss how high the next interest rate hike from the central bank would be, and some Wall Street traders were concerned rates could rise much higher than 75 basis points, despite Fed Chair Jerome Powell’s assertions last month that such a rate hike was not being “actively considered.”