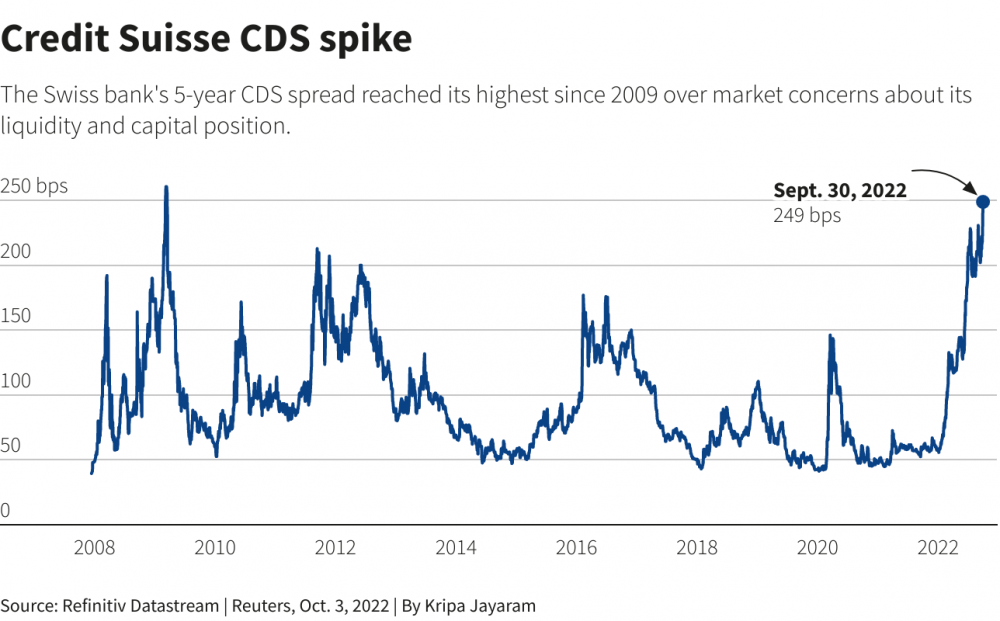 On October 03 market data indicated that Credit Suisse Group AG and Deutsche Bank AG were trading at extremely low values not seen since the 2008 financial crisis.

Shares in Credit Suisse slumped over 8 percent on October 08, 2022, as investors and traders fret over intense speculations that the Swiss banking giant’s liquidity is in trouble. Assumptions that the firm is having problems with liquidity sent its credit default swaps (CDSs) to their record highs. CDS are viewed as indicators of a firm’s financial condition with premiums for buying insurance against a default rising when the risk of default increases.

Credit Suisse, the 4 key numbers:
160b Cash
400b at call Liabilities
900b Leveraged exposure
40b Equity”

At the end of August, Deutsche Bank analyzed the issues Credit Suisse was facing, and, the bank’s analysts noted that “there was a $4.1 billion gap that needs to be filled in order to combat the financial institution’s financial well-being. Furthermore, Credit Suisse’s credit default insurance (CDS) levels resemble the same CDS levels Lehman Brothers had just before the bank’s bankruptcy”.

The New York Times points out that the Swiss bank giant incurred a $5.5 billion loss from the collapse of the investment firm Archegos, and a $1.7 billion loss from the financial distress of the lender Greensill.
The intense speculation prompted Credit Suisse chief executive officer Ulrich Koerner to issue a memo, admitting that the bank is facing a “critical moment” but stressing that the Swiss-based financial institution has a “strong capital base and liquidity position”.

As central banks continue to hike up interest rates and galloping energy prices much of Europe is on the verge of recession, and it may not be surprising if problems start surfacing in the financial system.